Not everyone is a fan – and I can see why…

I watched this movie when it was first added to Netflix and although I enjoyed it, I had so serious concerns while watching the movie. As an adult I can see the obvious problems, but what about the teenagers who feel the same way as Sierra, or who have no adults who can reassure them this was only a movie?

Sierra Burgess was a heavy set “outsider” in a typical high school setting. She was a band member and people generally didn’t notice or see her, minus Veronica, the head of the cheerleading squad, who is a rival of hers. So at the beginning of the movie, Sierra is seen posting adds with her phone number for tutoring. Veronica sees it and removes her phone number from the form.

Veronica is the typical mean girl from teen movies because she doesn’t believe in dating “losers” and thinks that a person’s friends define them. So when Jamey approaches her for her number she gives Sierra’s number because his friends aren’t her type and since he hangs with them, neither is he.

Now, Jamey starts texting Sierra who has never had a boy interested in her, nor was ever distracted from her work before. She begins to fall for him but decides not to tell him that she is not who he thinks she is. Basically, she is a catfish. She comes up with a plan to get him to think she is still Veronica when she finds out that Veronica’s college boyfriend thinks she’s stupid and dumps her.

This movie gives teenagers complete wrong information on so many levels.

Its as if the writer was trying to bring back all the old high school/teenager stereotypes back into play. And the ending was super predictable and a complete lie. If you catfish someone or start a relationship based on a lie, it will not end in happy ever after.

I wasn’t super upset until I watched this video 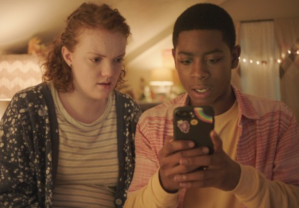 How can we allow this kind of narrative happen in this day and age? I thought part of the movie was funny because it reminded me of the old 80’s movies and Dan kept asking questions like “Is being a cheerleader still a thing?”… Dan is Sierra’s best friend who tells her all the things I wanted to tell her. Like tell Jamey the truth and nothing good can come from lying.

There are deeper stories told in this movie, as Veronica mother was pressuring her to be skinny and a mean girl because of her insecurities. Sierra’s father is a famous writer and her mother a self-esteem self-help writer, who never see their issues with their daughter in the home. Even when she brought it up, her parents never reassured her, never made her see the beauty in herself. (A huge plot hole – I have questions.)

I let my twelve-year-old watch…

…and I was so happy to see that she had the same thoughts that I had. I think that we need to not try to bring back the insecurities of the 80s and 90s in movies but make more relevant movies to the messages that we have been putting out for so long.

Shame on the writer, who is a woman, Lindsey Beer, for writing a script that brings back fat shaming and stereotypes for all.

There was, however, a great cast:

Here is the trailer.. watch it, and tell me what you think.