Not a Netflix Original, But I Found It There.

I love movies with a deeper message than you think you will get in the beginning. I was a big old baby crying in the end. (Don’t worry, as usual, I will not spoil the good things for you).

This movie is a flashback movie it starts with Ron Hall (Greg Kinnear) leaving his home so he can write a book. Something that he has never done before. He goes to a remote place and stays at a friend home to begin writing this novel uninterrupted. The flashback starts off by telling his story as an art dealer, a husband, and a father. While at an art viewing, a woman comes up to him and tells him that she knows about his affair, and if he doesn’t tell his wife, she would. 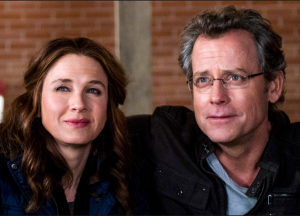 To me, his wife, Debbie (Renée Zellweger), was the perfect mixture of love and grace. She was furious with him but eventually asked for her number. Told her she was not mad at her and that she forgave her. She said she hoped that one day she could find the kind of love that she and her husband had and hopefully if they got there again she would not be hearing from her husband again.  – That was amazing. I could’ve never had the courage to say that.

She told him that if he wanted to go he could and then asked him what he wanted. He told her he wanted her, and here is where the story begins. To be hurt and angry and say you know if you are not happy, you can go. Is a level of patience and understanding that many of us only dream of getting to. Now she made him make it up to her, and he tried to complain, but she never listened, and everything she made him do made him a better person.

One night his wife has a dream that she’s in a hospital bed, but she was sitting in the chair watching herself. She gets up and walks down a hallway that leads to a set of double doors.  The doors open up to a field. She walks out the doors and a tall black man is standing there waiting for her, not in a romantic way, but in a saving grace kind of way. She tells her husband and they begin searching for him. Only when they find him, his nickname is Suicide (Djimon Hounsou) and he is a tough cookie to break through to.

This story is beautiful, it shows when people step out there comfort zone and meet people outside their circle, that there is magic there. Not fairytale magic, but pure joy and a different understanding of life. Debbie opened Ron’s eyes to people he would walk past and not think twice about. Debbie, a visionary and changed the lives of everyone she touched.

This movie was based off a true story and I cried big baby tears of joy and sorrow at the end (I can be mushy at times.) The original book was written by John Hall, Denver Moore, and Lynn Vincent. I haven’t read this, but this book and the next book that is a continuation of the story are definitely on my TBR (to be read) list.

The director Michael Carney did an amazing job of capturing a story that needed to be told. The characters were amazingly cast, and that credit goes to Tracy Kilpatrick and John Papsidera.

If you haven’t watched and need something beautifully motivating, go watch and enjoy.

One thought on “Same Kind of Different As Me”