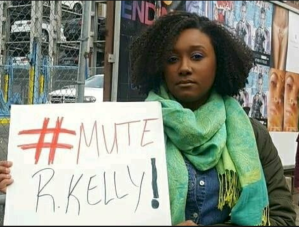 Why are people still listening to the old 80’s and 90’s jams of R.Kelly? Now trust I used to be a big fan, even after I knew about the Aaliyah scandal, but I was a child and childish minded and knew no better. Not any longer. I block all his music. I refuse to let my dollars line his pockets to keep more young women in captivity.

This man is a predator. We seem to let men who are well liked, get away with sexual assault, I mean many people were backing Bill Cosby even after he was sentenced. (Yes I know that a sentence doesn’t always mean someones guilty, but yal we have to admit. Bill Cosby was guilty, just as R. Kelly is.

Then there are directors like Chris Stokes that we know abused young boys like the ones from B2K, but he is still making movies. Why? Because we are still watching. I went to watch a movie until I saw he was the director. 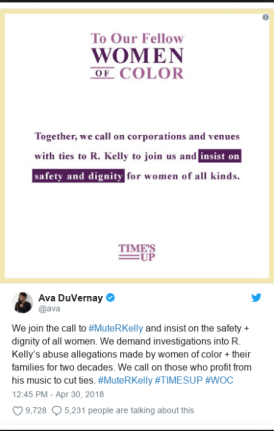 I refuse to put money in the pocket of someone who is inappropriate in their private lives. It’s like the more money we put in their pockets the more we are saying its ok. Is it? Would you trust your teenage daughter around R.Kelly? Would you let your son be alone with Chris Stokes? So why is ok to support them?

Why is it ok to support their careers when we will take down every racist white person who calls the police or spits racist words out their mouth. Why not do the same to the predators and child molesters? They are worse than the blatant racist because they pry on children and our young.

Mute R.Kelly. Mute Chris Stokes (stop acting in his movies for a check!) and mute all the men AND women who are awful people in real life. Supporting them means you support what they do, and I personally cannot rock with you.

One thought on “Mute R. Kelly and Others Like Him”