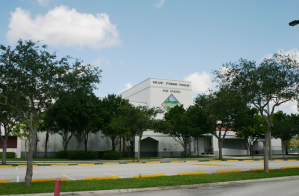 Yesterday, the country watched as teenage students came pouring out Marjory Stoneman Douglas High School with tear stained faces and confusion. Seems a student who was marked a bad apple was back with a vengeance. One of the teachers remember the kid as one who wasn’t allowed to have a backpack at school, he threatened the school plenty times in the past, including a comment on a YouTube video that was forwarded to the FBI, so is he the only one to blame for this crime? I don’t think so, I think there is a long line of people who are to blame for the lives that were lost.

This is a former student, a student who wasn’t allowed to bring book bags to school because of his threats towards the school. A student, that instead of getting help for whatever mental health issues that was there, was put out and left to his own thoughts and dangerous threats. Parents and kids that went to this school everyday not knowing the history. Students went today thinking it was a holiday full of love and flirting, yet had no idea that some it would be its last. 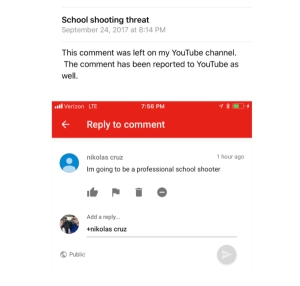 As a mother of four girls, two of whom are in high school, I cannot imagine this, but at the same time, unfortunately, I can. We come from a time zone where we have posters that say “No Bullying”, but we don’t abide by it. I am waiting on the backstory of this kid, because while now he is a murder, I wonder where mental health and bullying comes into play.

On his Instagram page, Cruz posted a photograph of a shotgun. In another photo, he is shown brandishing a pistol, which appeared to be a type of BB gun. In other photos, he is covering his face with a kerchief, and brandishing long knives.

Other postings under the name Nikolas Cruz also included threatening comments on YouTube and other sites, including “I whana shoot people with my AR-15 (sic),” “I wanna die Fighting killing shit ton of people,” and “I am going to kill law enforcement one day they go after the good people.” – CNN

We need to do something about how we teach and mold our children, or more attacks like this one will happen. They are already a daily issue in this country, because we don’t put the movement behind the “No Bullying” posters. Principals feel like they have too much to do than to stop a bully in his tracks, school counselors usually don’t have a psychology degree let alone a license. If there are no parents to help, which trust in these days, there aren’t many, who do these kids have to turn to? What happened to the assemblies where people would come in and tell their story about the realness of life, the pain of bullying and effects of drugs? What happened to the D.A.R.E. program, that no only told you about the dangers of drug, but also gave you information about standing up for yourself. 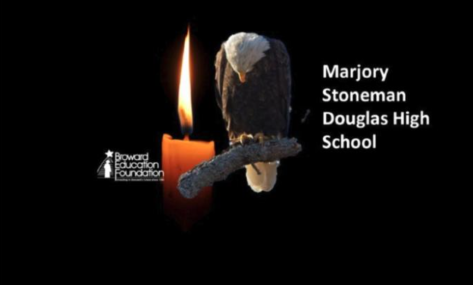 In a world full of hatred and violence, led by a President who is outward with his hate and bigotry for those who don’t look like him. His words on this tragedy were not moving, nor did his words make you feel like he wanted to find a way to change what continues to happen. America is becoming a place where a camera or video is better than helping those in harms way. Where having more likes is more important that giving your time or helping someone else in need. We didn’t and don’t just see this with everyday people, but we see that with the news outlets.

So how do we change this? How do we stop letting these children die in vain? How do we protect our youth and let them know they don’t have to be afraid when a balloon pops, when a fire alarm goes off, how to we make them safe to go outside again? I struggle with this when my daughter asks me, because how can we? What can I say, because teachers are dying with these students, guns are not the answer, but taking them away are not either.

There needs to be a discussion, there needs to be people taking back our schools and our communities. We need a Crazy Joe from Lean On Me to take over the school legislator because the little quiet caucasian lady is not it. My love and prayers are with the families and friends and those effected by the shooting.