Lets not wait for another hashtag…

I have watched Fruitvale Station a half dozen times, and I cry overtime even though I already know the ending. Oscar Grant was not the first police officer killing I heard of, but it was the one that I was old enough to really understand and be upset by. The sad thing is, it only got worse from there. 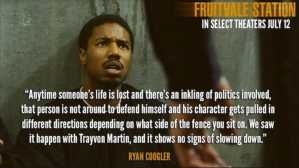 In case you haven’t heard of the movie, or the situation, let me break it down. Oscar Grant was shot and killed by police officers on January 1st, 2009. The many recordings from several peoples phones helped to convict the police officer of murder, where he was sentenced to 2 years in prison (he only served 11 months). This shows a young black man, 22 years old, who wasn’t perfect and did as was told, was provoked and murdered.

I’m sure there are plenty who look at this movie and say they should’ve been quiet, they should’ve done this and that, but I call BULLSHIT! No one deserves to be shot and killed without a reason, heres the cops reason – he thought he was reaching for his taser. Bruh, you don’t know the difference between a taser and a gun, then you shouldn’t be a cop.

See although black men and women (including children) are more likely to be killed than  others, I don’t believe its a race thing, I believe its a police training issue. Police around the country are starting to shoot first and then ask questions, then blame the person they murdered. Think about Justine Ruszczyk, a white woman, who came looking for help and was shot through the police car window because she supposedly startled them.

I remember a time when police officers were trained to shoot to disarm not shoot to kill and now these cops are acting like they are playing Call of Duty and going straight for the kill shot. I mean with no time to assess the situation. Tamir Rice was shot and killed within seconds of the police arriving on the scene. This was a child who was probably scared to death when they pulled up. They didn’t even give him a chance to put anything he had down, nor given instructions to. The officers came on the scene with the intent to gun him down.

The sad part is the justice system does not help by not making examples out of these officers and sending them to jail to rot, nor our their fellow officers by turning in the cops who take power for granted. The police are supposed to protect and serve, and yet there are more kids who are afraid of them than any other villain. My children are afraid of being pulled over because of Sandra Bland’s story or Philando Castile, or call the police when they are afraid because of Yvette Smith.

We have to change this, don’t be quiet now, just because there is no new hashtag to be angry over, we need to create change now. Do you know that four, FOUR Black Lives Matters activist have been murdered, oh, wait, I’m sorry, you have to include Sandra Bland because she made videos about the problem before she was murdered. Things need to change so that we can feel safe with the people who are supposed to protect us, because right now, you could call the cops and be the next victim.